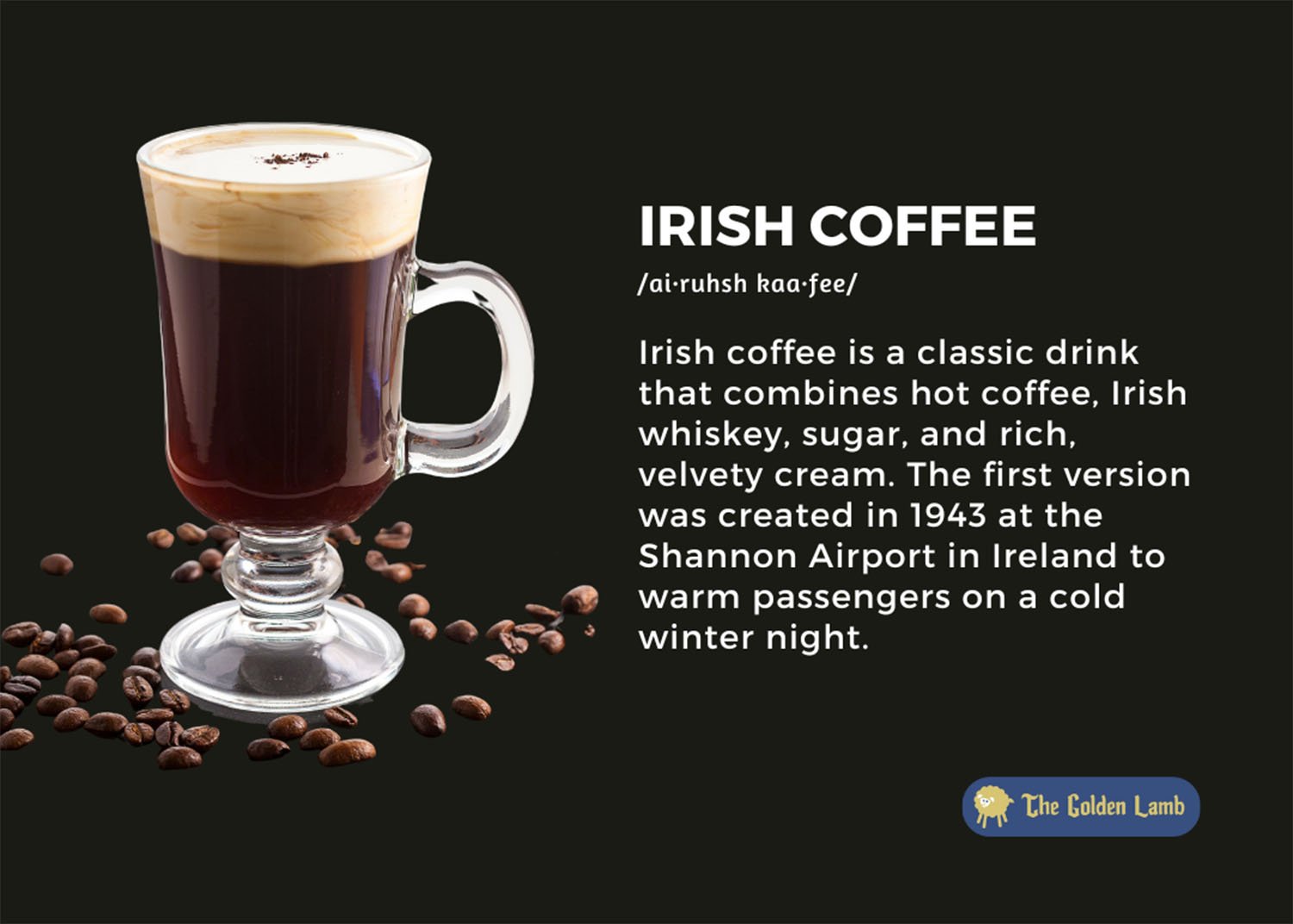 Irish coffee combines hot coffee, Irish whiskey, sugar, and rich, velvety whipped cream. It’s the ideal boozy drink to warm you up on a cold winter night or to enjoy as a rich dessert after dinner. With its roots in Ireland, Irish coffee can be found at most pubs, bars, and Irish-themed establishments all around the world.

What is Irish Coffee? It’s a relaxing, alcoholic drink made with hot coffee, Irish whiskey, sugar, and rich cream. The ingredients are typically combined in a tall glass or mug and served hot, with a layer of whipped or poured cream on top.

The Irish Coffee is generally believed to have been created in the 1940s at Foynes Airport in County Limerick, Ireland. According to the legend, a group of American passengers arrived at the airport on a miserable, rainy night and requested a hot, alcoholic drink to warm them up.

Chef Joe Sheridan, working at the airport then, decided to mix hot coffee, Irish whiskey, sugar, and cream to create a drink that would meet the passengers’ requests. The drink was a hit, and Sheridan named it “Irish coffee” in honor of the main ingredient.

Before the classic Irish coffee became popular, several other variations of coffee cocktails were served in coffee houses. In the mid-19th century, the Pharisäer and Fiaker were served in Viennese coffee houses, and both were topped with whipped cream.

Around 1900, the Kaisermelange, Maria Theresia, and Biedermeier-Kaffee were popular coffee cocktail options in Viennese cafés. And in 19th-century France, a mixture of coffee and spirits was referred to as a Gloria. People have been enjoying boozy coffee drinks for a long time!

There are many variations of liqueur coffees, including Irish cream coffee (also known as Bailey’s coffee), which uses Irish cream as a substitute for whiskey, cream, and sugar. Other variations include:

How to make Irish Coffee at Home:

To make Irish coffee, you will need the following ingredients:

Note: These mugs on Amazon are the kind you should look for when making Irish coffee.

Irish Coffee vs. Other Coffee Drinks

This section will explore the differences between Irish coffee and other popular drinks like the espresso martini and the Bailey’s coffee.

Irish coffee is made with hot coffee, Irish whiskey, sugar, and heavy cream, served hot with a layer of cream. An espresso martini is a cold, potent cocktail made with espresso, vodka, Kahlua, and simple syrup, and is often served over ice.

Irish coffee is warm with hot coffee, whiskey, classic syrup, and heavy whipping cream. On the other hand, a White Russian is a cold, creamy cocktail made with vodka, Kahlua, and heavy cream, served over ice.

The main difference between the two is the type of alcohol used. Irish coffee uses Irish whiskey, while Bailey’s coffee uses Bailey’s Irish Cream liqueur. Both drinks are typically served hot, in a mug or a glass.

Irish coffee is made with what type of alcohol?

Irish coffee is made with Irish whiskey. You can make it with other types of whiskeys, ryes, or bourbons.

Can Irish coffee get you drunk?

Irish coffee contains Irish whiskey, which can definitely get you drunk if you drink in excess. How drunk you get will depend on the strength of the coffee and whiskey, the size of the drink, and your size, weight, and alcohol tolerance.

Where can I buy Irish Coffee Mugs? 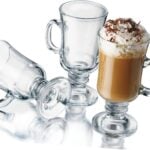 Irish Coffee mugs are available on Amazon and are specifically designed to serve Irish coffee. They are typically made of glass or ceramic and have a handle. They have a tapered rim allowing room for whipped or poured cream on top of the coffee mixture.

Can Irish coffee be iced?

Yes, it is possible to make an iced version of Irish coffee. To make iced Irish coffee, simply mix cold brew coffee with whiskey and simple syrup. Pour over ice and top with whipped cream.