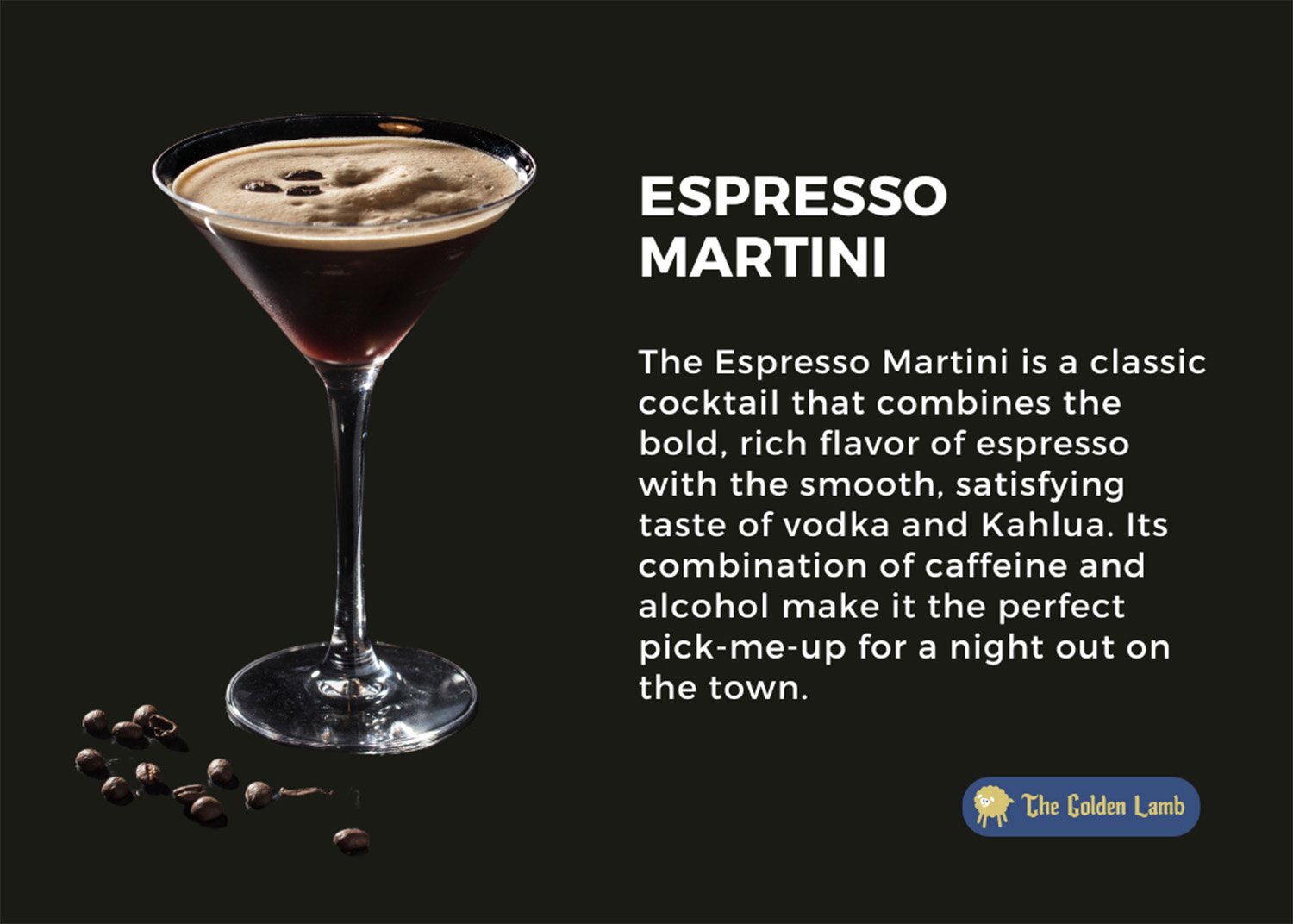 The Espresso Martini is a classic cocktail that combines the bold, rich flavor of espresso with the smooth, satisfying taste of vodka and Kahlua. Its combination of caffeine and alcohol make it the perfect pick-me-up for a night out on the town. Whether you’re a fan of coffee or cocktails (or both!), this cocktail is a must-try for anyone looking to shake up their drink menu.

The Espresso Martini is a cocktail made with espresso, vodka, and Kahlua (a coffee-flavored liqueur). Since its creation, it’s gained widespread popularity and can now be found on the menus of bars and restaurants around the world.

It is often served in a tall glass and garnished with a twist of lemon peel. The combination of the caffeine from the espresso and the alcohol in the vodka creates a potent and invigorating drink that has become a staple of the cocktail scene.

The Espresso Martini is believed to have been created in the 1980s by Dick Bradsell, a bartender at Fred’s Club in London. According to legend, a model asked him to make her a drink that would “wake me up, and then fuck me up.” Bradsell combined espresso, vodka, and Kahlua to create the Espresso Martini, and it quickly became a popular choice at the bar.

Since its creation, it has gained widespread popularity and can now be found on the menus of bars and restaurants around the world. It is often served in a tall glass and garnished with a twist of lemon peel.

Differences between Espresso Martini and other coffee-based cocktails

The Espresso Martini is garnished with a twist of lemon peel, while the Carajillo is not typically garnished. The main difference between the two cocktails is the type of spirit used. Both cocktails are made with espresso and are suitable for those who enjoy coffee and spirits.

How to Make Espresso Martini

To make an Espresso Martini, you will need the following ingredients:

To prepare the cocktail, you will need to:

Variations on the traditional recipe

There are many variations on the traditional Espresso Martini cocktail that you can try. Some of the most popular variations include:

These are just a few examples of the many variations on the traditional Espresso Martini that you can try. Feel free to experiment with different ingredients and flavors to find the perfect combination for your taste.

Espresso Martinis are generally gluten-free, but it is important to check ingredients of any mixers or garnishes. Some syrups or liqueurs may contain wheat or barley, which are sources of gluten. Use gluten-free sweeteners or ask your bartender to use a gluten-free syrup or liqueur in your cocktail if you are concerned about gluten.

Can espresso martinis keep you awake?

Espresso Martinis can potentially keep you awake due to the caffeine content of the espresso. However, the alcohol in the cocktail may also have a sedative effect, so the overall effect on sleep will depend on a variety of factors. It is best to drink Espresso Martinis in moderation.

How many calories are in an Espresso Martini?

The Espresso Martini is known for its strong, bold flavor and invigorating effects. The combination of the caffeine from the espresso and the alcohol in the vodka creates a potent drink that is perfect for a night out or as a pick-me-up after a long day. It is a popular choice at bars and restaurants around the world and has become a staple of the cocktail scene.