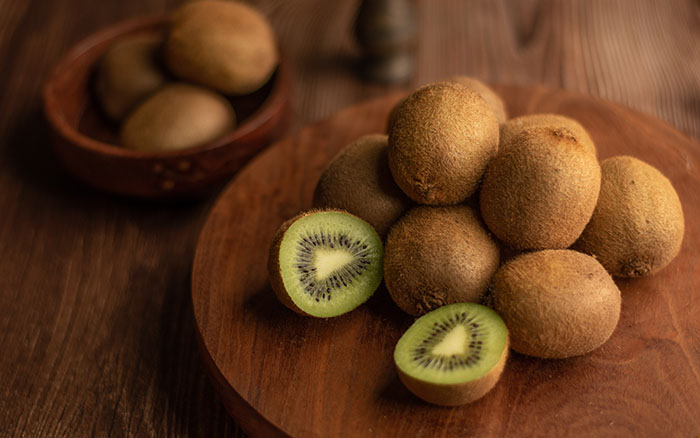 Kiwi is a bright green sweet fruit with a refreshing taste and a unique texture. Are you unsure about the best way to cut a kiwi? Read and choose the approach that suits you!

There are a few different ways to cut a kiwi fruit, but we’ll focus on four easy methods. These methods include using a basic knife, zig-zag cutting, a spoon, and a peeler.

So read on to learn everything you need to know about how to cut a kiwi fruit!

Kiwis are rich in dietary fiber and vitamin C, and they have several health advantages, according to WebMD. This sour fruit can boost immune, digestive, and heart health.

The kiwi is a fruit that is good for you because it is loaded with vitamins and antioxidants.

Where to Buy Kiwi Fruit

This fruit originated in the Far East, and for many years it was grown in what is now China. Finally, it reached the country’s borders in 1904, at the start of the 20th century, when New Zealand school principal Isabel Fraser returned from her travels with some kiwifruit seeds.

Today kiwi fruit is commercially grown in California and New Zealand. You can purchase kiwi fruit at your local grocery store or farmer’s market.

How to Cut a Kiwi Fruit

Below you will find four easy ways to cut kiwi fruit. Just follow the simple steps, and you will be able to enjoy some delicious ripe kiwifruit in no time!

The first method for cutting a kiwi is done by using a basic knife and is probably the easiest way to cut a kiwi. Cut off both ends of the kiwi by placing it on a cutting board first.

After the ends have been cut off, place the kiwi on the cutting board on one end, and using a downward motion, peel off the skin from all sides of the kiwi.

Make sure you don’t peel too much flesh while removing the peel, or you’ll waste it. Alternatively, you can carefully strip off the fuzzy skin using a knife.

After removing the peel, take your peeled kiwi and dice it into bite-sized pieces. A knife can divide it into small cubes or even thin discs. You don’t need to remove the kiwi’s small seeds because they are edible.

Another way to cut your kiwi is to use a sharp knife to create a zig-zag design on it. This method is also known as the “star cut” method. Although this approach is the most satisfying to look at, mastering it takes time.

Simply insert the knife’s pointed side into the kiwi. Then, make a triangle-shaped motion with your knife in a diagonal manner. All the way around the kiwi, cutting half triangles.

Then, after going all the way around the kiwi, carefully pull the two halves apart.

This approach works best if you want to consume the kiwi’s edible peel. Vitamin C and fiber are abundant in the skin.

You can also use a spoon as another quick and simple tool for kiwi cutting. Kiwi slices end up perfectly circular, thanks to this “spoon method” technique.

Start by cutting off the ends of the kiwi fruit (like we did in the first method). Once the ends have been cut off, press the skin with a tiny teaspoon.

Dig your spoon slowly in the opposite direction. Place the spoon close to the skin to achieve the ideal spherical shape.

You can slip the skin away once you have gently peeled it away from the fruit. Use a small knife to remove the additional skin if it is difficult to remove.

Use a vegetable peeler as another quick and simple method to peel and cut a kiwi. So, how do you use a peeler to peel a Kiwi? As we did in the earlier techniques, start by trimming off the end of the kiwi.

The hairy skin on all sides should then be peeled off using a vegetable peeler. After the kiwi has been peeled, you can slice it with a little knife.

The kiwi can be divided into smaller pieces if you like. It’s time to get inventive now that you have finished the more difficult step of peeling the skin!

The kiwi can be sliced into tiny, spherical discs. If you want to use the kiwi to line a fruit salad or decorate a cake, kiwi discs make the perfect garnish.

How Should You Serve Kiwi?

Now that you have learned how to cut a kiwi, it is time to think about how you want to serve it!

There are many ways that kiwi can be eaten. It can be consumed plain, or it can be used as an ingredient in a dish.

Ripe kiwis can be eaten as is, but they make a great addition to a fruit platter with other tasty fruits, smoothies, yogurt, cereal, or salads.

Kiwi is also a fruit that can be baked or grilled. When baking kiwi, it is important to slice it first so that the heat can evenly penetrate the fruit.

To grill the kiwi, cut it in half and remove the seeds before placing it on the grill. Grill for two to three minutes on each side. Top with some whipped cream!

Did you know? Kiwifruit was originally known as Chinese Gooseberry but was rebranded for Western consumers.

How Should You Store Kiwi?

Ripe kiwis will last two to three days stored in the fridge if stored properly in an airtight container.

Sliced & peeled kiwi can last for about 24 hours at room temperature (out of direct sunlight).

Kiwis can also be frozen! Start by peeling off the skin of the kiwi and then proceed to cut it into small pieces using one of the methods above.

Next, place the slices on a baking sheet lined with parchment paper and freeze for two hours.

Once they are frozen solid, transfer the slices to a freezer-safe bag or container. Frozen kiwi slices can last up to ten months in the freezer. This is a great way to plan ahead for a delicious snack any time of year!

Now that you know all there is to know about how to cut a kiwi fruit, it’s time to get slicing! Whether you’re using the basic knife method or the zig-zag cutting technique, these simple steps will have you enjoying this delicious fruit in no time.

And don’t forget: kiwis are not just for eating fresh – they can also be added to smoothies, fruit salads, and other dishes for a burst of flavor and nutrition.

So what are you waiting for? Get started cutting those kiwis!

While you’re here, check out my other fruit guides!

My most popular recipes: