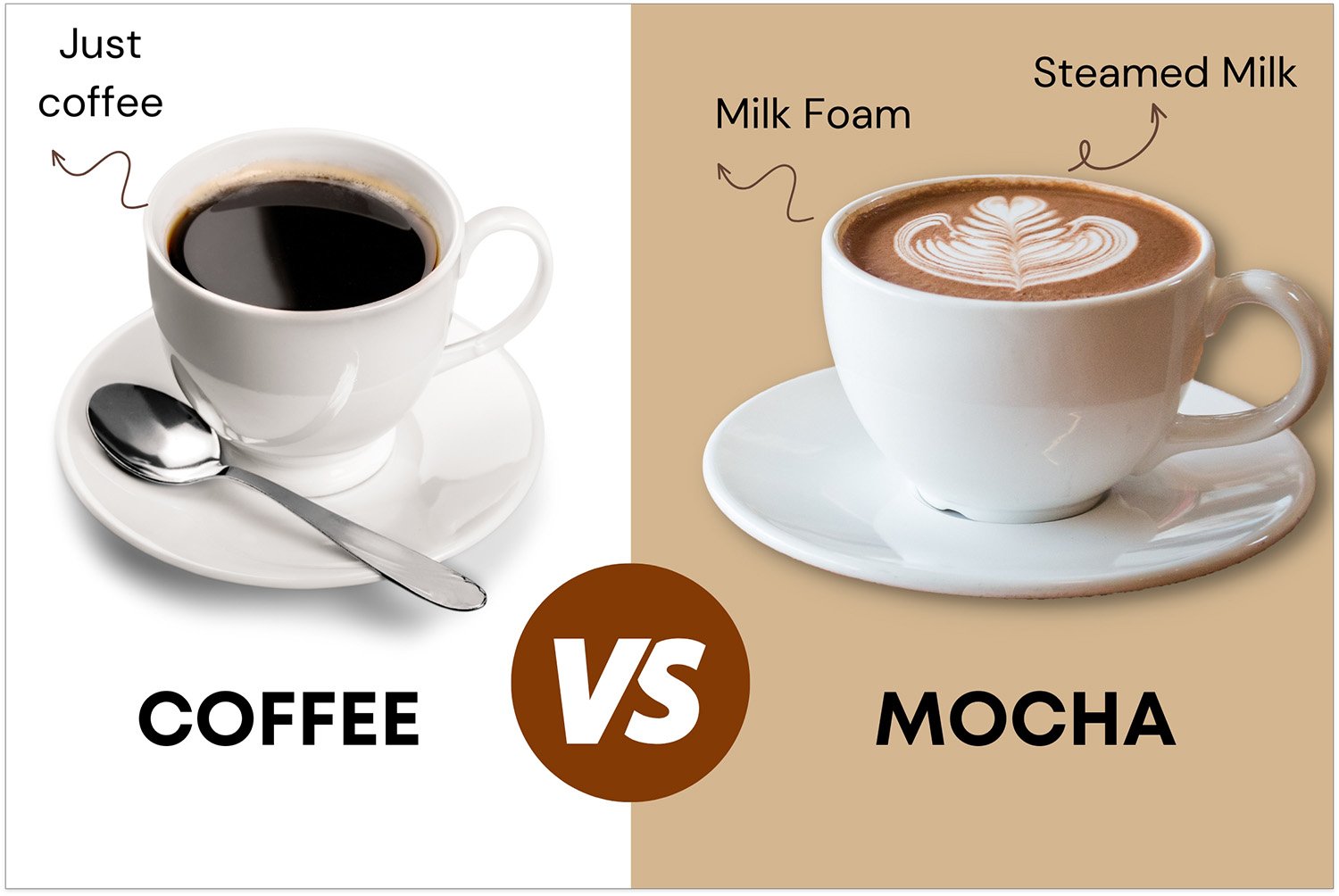 In today’s blog post, I will answer a question that might be percolating (sorry) in the back of your mind. Mocha vs coffee–what’s the difference?

In the sweltering heat of the St. Louis summers, my wife, daughter, and I love to visit our local coffee shop, Kaldi’s Coffee. We each get an iced mocha, followed by a 2-hour jaunt around Ikea. But every other day of the year, you’ll find a hot cup of coffee in my hands–at least 5 times per day.

What is a Mocha?

A mocha, aka caffè mocha, is an espresso beverage made with steamed milk, espresso, and chocolate. Mochas have a layer of milk foam on top, typical for drinks that are made with steamed milk (caffè latte, cappuccino, etc.) Mochas can also be topped with whipped cream and a dusting of cocoa powder, sugar, cinnamon, or even marshmallows (just like hot chocolate!)

Coffee is a drink made from roasted coffee beans and hot water. Coffee beans are ground, placed in a filter, and then hot water slowly makes its way through the grounds. It’s mostly served hot, but in the summer months, people enjoy drinking cold brew or iced coffee.

Here are 3 characteristics that both mochas and coffee share. Both are made with coffee beans, both have caffeine, and both can be served hot or iced.

1. Both are made with coffee beans

Both Mochas and coffee have caffeine since caffeine is a naturally occurring ingredient in coffee beans. Mochas also contain chocolate, which has caffeine. But a cup of coffee actually has 3x more mg of caffeine than a mocha!

Iced coffees and iced mochas are most popular in the summer months. Iced coffee is normally made with cold brew coffee. Cold brew coffee is made by steeping coffee grounds in cold water for at least 24 hours. Cold brews tend to have a more subtle and fruity flavor vs. the same beans brewed hot.

Mochas can also be served hot or cold. The main ingredients are the same. The only difference is with the hot mocha, you add steamed milk. With an iced coffee, you add cold milk. You can think of an iced caffe mocha as chocolate milk with shots of espresso added.

The ingredients are the main difference between a cup of coffee and a mocha. A cup of coffee only has ground coffee and hot water, while a mocha has steamed milk, espresso, and chocolate syrup or chocolate powder. Coffee also has almost zero calories; a 12-ounce mocha made with 2% milk has about 290 calories.

Another difference between coffee and mochas is its caffeine content. A 12-ounce cup of coffee has almost 3x as much caffeine as a 12-ounce mocha.

Mochas are one of many types of espresso-based drinks. Mochas are made with espresso, chocolate, and steamed milk and are often topped with whipped cream. Coffee is much simpler to make. All you need is ground coffee beans and hot water.

Caffeine content is a big difference between a coffee and a mocha. Since mochas contain chocolate, they naturally have added caffeine. But don’t let that fool you. A 12-ounce cup of coffee has almost 3 times as much caffeine as a 12-ounce mocha!

Mochas are made with milk and chocolate, so they have more calories than black coffee. Black coffee has almost zero calories, but the calorie content increases when you add cream and sugar.

Which has more caffeine: a mocha or coffee?

Not to mention, coffee is known to be beneficial for your overall health- it can help you lose weight, boost your metabolism, and improve your cognitive function.

Why is my mocha foamy?

Ordinarily, when milk is steamed with a steam wand at an espresso shop, it produces small air bubbles. These bubbles give the hot milk a characteristic frothy texture. This same method of steaming milk is used to make a latte, a cafe au lait, and a mocha.

Therefore, it’s perfectly normal for your mocha to have 1/4 to 1/2 inches of foam on top. Plus, if you have a skilled barista, they’ll leave you some beautiful latte art on your mocha!

Coffee vs. Espresso – What’s The Difference?

Espresso shots are “pulled” from an espresso machine. Coffee is normally brewed in a coffee maker, aka, a drip-coffee machine. Other common methods of brewing coffee include using a french press, an Aeropress, a pour-over, or a cold brew pitcher.

Where did Mochas Originate?

Mocha is an espresso drink that has been around for centuries. The name mocha comes from the port of Al Mokka in Yemen, where coffee beans with a naturally chocolatey flavor were first discovered. At that time, these beans were known as “mocha beans.” In modern times, the word”mocha” refers to coffee drinks with chocolate rather than coffee beans.

Where did Coffee Originate?

Coffee is a beverage that originated in Ethiopia. It became popular in Western Europe in the 1600s and is now a staple of Western civilizations. If you’re bored, you can read the complete history of coffee here on Wikipedia.

Frank Hu, the chair of the Department of Nutrition at Harvard, believes that 2-5 cups of black coffee a day are perfectly fine and can be linked to lowering the risk for heart disease, type 2 diabetes, cancer, and even depression. That said, coffee becomes less healthy when you start adding cream and sweetener.

A 12-ounce mocha from Starbucks has about 290 calories. Again, it’s not the end of the world if you have one or two a day, but as the saying goes, “everything in balance.”

You can make your mocha healthier by swapping out 2% milk with almond milk. For example, almond milk has only 61 calories per 12 ounces, while 2% milk has 183 calories.

Most coffee shops – like Starbucks – use milk chocolate in their mochas. However, some specialty coffee shops may use less sweet, dark chocolate. Here are some of the more common mocha variations.

A white-chocolate mocha is made with white chocolate rather than milk or dark chocolate. These types of mochas tend to be sweeter and have a few more calories.

Black-and-white mochas are made with a mix of white chocolate and milk chocolate. You’ll hear these mochas called different names depending on where you buy your coffee.

Last but definitely not least–there’s a variation of the mocha known colloquially as a “poor man’s mocha.” Also known as a Mocha Coffee. You make this by adding a packet of hot-coffee mix to a cup of hot coffee!

And finally, here are a few more variations of the classic mocha latte that I’ve come across over the years: