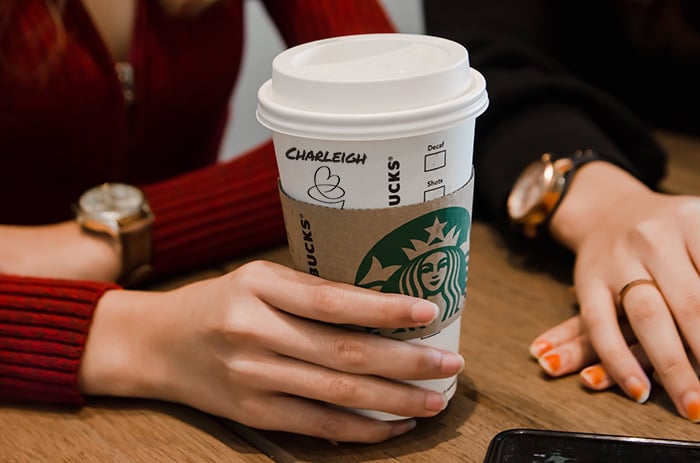 Chai lattes are delicious and caffeine-rich, making them the perfect beverage to fight morning fatigue. But the question remains: how many calories in a chai latte? Well, the answer is…size matters! (only in this case, gentlemen).

Chai tea is a spiced and sweet black tea that originated in India. Starbucks introduced a variation of the tea drink called a chai latte, a popular alternative to espresso lattes. The latte is made with black tea, spices, and sweeteners and has the same energy-boosting benefits as espresso lattes.

What ingredients Are in a chai latte?

A chai tea latte from Starbucks coffee shops includes chai concentrate, steamed 2% milk, and milk foam. The Tazo Chai Tea Concentrate available on Amazon and grocery stores isn’t as strong as what Starbucks uses. So you’ll need to use more if you’re making a chai latte at home.

The Tazo Chai Tea Concentrate is made with these ingredients:

How Many Calories in a Chai Latte From Starbucks?

Calorie content in a Chai from Starbucks will differ depending on the size of the drink. In general, chai lattes contain a lot of sugar and grams of total carbohydrates. The caloric breakdown for each size is listed below, as well as the Weight Watchers points values.

The Starbucks Short Chai Latte contains 8 ounces of creamy goodness loaded with 50 milligrams of caffeine. It has 120 calories (20 from fat) and 2 grams of total fat (1.5 grams of which are saturated fat).

In addition, it has 22 grams of carbohydrates (21 grams from sugar) and 4 grams of protein. A short chai latte also has 4% of your daily values for Vitamin A.

The total calories in an average 12-ounce cup of chai from Starbucks is 180 calories (30 from fat). Total fat content is 3 grams, 2 of which are saturated fat. Tall chai lattes have 75 milligrams of caffeine, 33 grams of carbohydrates (31 grams from sugar), and 6 grams of protein.

The Starbucks Grande Chai Latte has 240 calories (35 from fat) and is 16 fluid ounces. It has 4 grams of total fat, of which 2.5 are saturated fat. The caffeine content is an impressive 100 milligrams with an equally impressive 44 grams of carbohydrates (41 grams of sugar) and 7 grams of protein.

The Starbucks Venti Chai Latte has 310 calories (50 from fat) and is 20 fluid ounces. It has 6 grams of fat, 3 of which are saturated fat. The caffeine content is an impressive 120 milligrams. It has 56 grams of carbohydrates (53 from sugar) and 10 grams of protein.

You can customize your chai tea latte by choosing different milk options and varying the amount of chai tea concentrate. Plant-based milks, such as almond milk, oat milk, and soy milk, are great ways to cut out unneeded fat and calories.

If you’re like me, you’re a big fan of cow’s milk. If you want to lower the number of calories in your chai, choose skim milk instead of 2% or whole milk. This is a lean way (somewhat guilt-free) to enjoy your chai.

Some things to keep in mind:

Is there caffeine in chai lattes?

Yes, chai lattes do have caffeine. However, the level of caffeine in a chai latte varies depending on the brand and recipe. Generally speaking, chai lattes have about the same caffeine as a cup of coffee.

A dirty chai latte recipe is made the same way as a regular chai recipe but with an added shot of espresso. The term “dirty” refers to the chai latte’s dark color when the espresso is added.

Just make sure when asking for a black eye that you’re able to duck quickly, on the off chance that the Barista is violent and unaware of the secret lingo.

Thanks so much for stopping by, guys! I hope this helped answer your burning Starbucks chai tea latte questions.