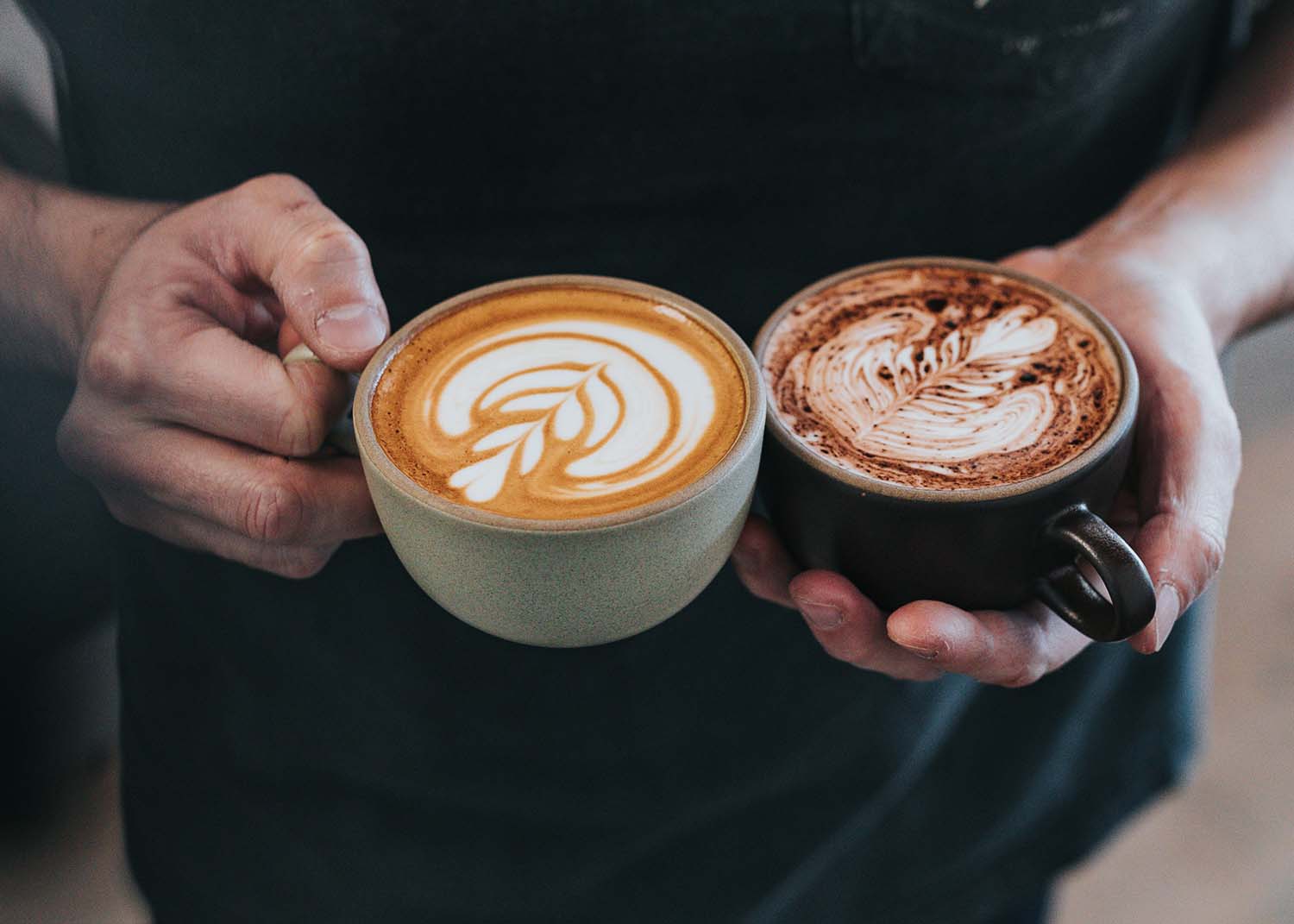 If you’ve ever wondered what the difference is between a latte and a mocha, then this article is for you. Of course, both drinks are delicious, but a few key differences set them apart. Okay, coffee lovers, let’s take a closer look.

A mocha, aka a mocha latte, is a sweet espresso drink made with chocolate syrup, steamed milk, and espresso. It’s often topped with whipped cream and chocolate drizzle or sprinkles. Mochas are perfect if you love the flavor of both chocolate and coffee.

The espresso and the chocolate give a mocha its sweet flavor and caffeine, while the milk thickens the texture and balances the acidity of the coffee. Mochas come in various flavors, such as milk chocolate, dark chocolate, and white chocolate.

Mochas are an incredibly popular drink you shouldn’t have trouble ordering from local coffee shops. You can think of a mocha as a latte with chocolate added or a hot chocolate with espresso added.

A caffè latte is a coffee beverage made with espresso and steamed velvety milk. The espresso gives the drink its intense, sweet bitterness, and the airy milk gives it its light texture. In addition, people often add flavored syrups to their lattes, such as vanilla syrup, cinnamon dolce syrup, or pumpkin spice syrup.

Mochas and lattes have a lot in common. First, both drinks’ main ingredients are espresso and steamed milk (which are made using an espresso machine). But what other characteristics do mochas and lattes share? Let’s take a closer look.

1. Both Have Steamed Milk & Espresso

Mochas and lattes are made with the same basic ingredients: espresso shots (doppios) and steamed milk. However, mochas have the addition of chocolate syrup and are sometimes topped with whipped cream. Like lattes, mochas are often served to showcase beautiful latte art.

A 12-ounce mocha and a 12-ounce latte have almost the same amount of caffeine. Both use a single shot of espresso, which has 64 milligrams of caffeine. But a mocha also has chocolate which bumps up the caffeine content slightly.

Note: Adding hot espresso directly to ice isn’t ideal. For one, it will shock the espresso, causing it to become bitter. Secondly, it melts the ice prematurely. Now you know what to look for when watching your barista make your drink!

To make iced, espresso-based drinks, the shots should be mixed with milk and/or chocolate before adding any ice.

The correct steps to make an iced latte:

The correct steps to make an iced mocha:

The main difference between a mocha and a latte is that a mocha has chocolate syrup. Let’s dive into the details a bit more so that you can choose the right drink.

Mochas and lattes are almost identical, except for mochas–which have chocolate sauce added. The chocolate is combined with shots of espresso before the steamed milk is added. Mochas can be topped with whipped cream and chocolate sprinkles or shavings. (Chocolate Sprinkles™ was my wrestling name in Middle school).

A caffe mocha has more calories than a latte. This is due to the addition of chocolate syrup in a mocha. For example, citing Starbucks nutrition: a tall 2% latte has 150 calories, and a tall 2% mocha has 290 calories.

A mocha is typically made with less foamy milk, and a latte is often “free-poured,” which means a skilled barista will pour milk directly into the cup without holding back the foam.

Note: Certain drinks require different methods of steaming milk. For example, milk for a cappuccino will have many more air bubbles than what’s needed for a caffè mocha. It’s a precise science that has a lot to do with the placement of the steam wand.

Whipped cream with chocolate drizzle is a popular addition to mochas. People from the United States have quite a sweet tooth and are used to getting whipped cream on their mochas by default. That said, whipped cream is rarely added in other countries. For example, many Europeans believe that espresso should be the star of the show and that adding too much sweetness ruins the taste.

Here’s a summary of the fundamental differences between the two drinks.

Which is sweeter, latte or mocha?

A mocha is sweeter because it has chocolate in it. A latte has a slight sweetness from the crema on the espresso, but it’s no match for the sugary chocolate flavor in a mocha.

Is a latte stronger than a mocha?

A mocha contains a slightly higher amount of caffeine than a latte because it has chocolate. The more chocolate that is used in a mocha, the more caffeine it will contain.

Which is better: latte or mocha?

White chocolate mochas are made with a type of chocolate that is sweeter and less rich than regular chocolate. In contrast, a latte is simply espresso and steamed milk.

What’s the difference between a mocha and an au lait?

Mocha vs. Latte vs. Breve

Thanks a latte for reading! I hope this article was helpful! Here are some additional blog posts that will aid your coffee journey.